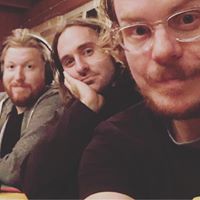 POSTPONED! – The End of America

The End of America is a band of friends, singers and travelers who blend three-part harmony with indie rock and folk. The Philadelphia-based outfit drifts through styles that resonate with fans of Jose Gonzales, CSNY and Dawes.

All frontmen of previous bands, Brendon Thomas, James Downes and Trevor Leonard met on tour in 2005. Quick to become best friends, they’d frequently join each other on stage, adding harmonies to each others’ songs. It wasn’t long before they decided to create a trio that highlights their vocal chemistry and captures the raw honesty of their performances.

Since their formation, they’ve released three albums and are now releasing a new single every month for the next year.

Well, that’s their bio and it is accurate, but it does not begin to state the beauty and power of their live performances. I met them when they competed in and won the Emerging Artist Showcase at the Falcon Ridge Folk Festival in 2017. They literally soar; both musically and vocally! We are thrilled to host them at the Homestead! Join us for this evening of extraordinary music and harmony!